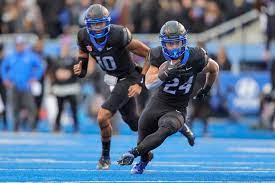 Saturday night in Boise, Puka Nacua’s all-time effort and late heroics propelled the BYU football team to a 31-28 triumph over Boise State, eradicating the demons of the previous month without a victory.

Nacua caught 14 passes for 157 yards and two scores, with his second touchdown putting the Cougars in front for good on a diving, acrobatic grab of Jaren Hall’s brilliantly thrown end-zone fade. Even more unlikely than the catch was that it occurred on fourth down, where BYU had converted only five of twenty-one such attempts before Nacua’s clutch performance.

Nacua is one of the top college football players, according to head coach Kalani Sitake.

It would be irrelevant. BYU’s defense rose to the situation and halted Boise in four plays, with Jakob Robinson intercepting the last Broncos pass to end the Cougars’ losing streak.

On the final drive, linebacker Ben Bywater stated, “We knew the game was on the line.” “Someone had to make a move in the end, and (Jacob) did so. Our players believed we could achieve this victory, and we accomplished so. These nail-biting games require mental tenacity, and we simply had that.”

Hall overcame two early interceptions to pass for a career-high 377 yards, run for an additional 82 yards, and account for all four of BYU’s touchdowns. Running back Hinckley Ropati exploded for 110 total yards on eight touches and a touchdown, taking a screen pass from Hall 48 yards to the end zone for the first BYU touchdown of his career.

Sitake stated of Ropati, “I don’t know whether you’ll be able to prevent him from coming on the field now.”

The victory moves BYU’s record to 5-5, one win away from bowl eligibility in a season that was perilously close to being a complete disaster had the Cougars lost in Boise.

“Love and learning is much more effective when you’re successful,” remarked Nacua.