Episode 3 of Wednesday begins just where the previous chapter ended, with Wednesday being captured in the secret Nightshade room. The sack is removed from her head, and her hands are tied behind her back. She is surrounded by masked individuals, but she recognizes Bianca and requests that she removes her mask. Everyone removes their masks, and Xavier inquires how she discovered their secret room. She responds that Rowan has shown her.

It appears that the Nightshades have been thriving in secret with the principal’s blessing. They are at a loss as to what to do with Wednesday, who has discovered their secret club. Xavier wants her to take the oath and join them, however, Bianca finds the concept repugnant. Wednesday, on the other hand, is less interested in joining their secret organization. She frees herself and leaves after accusing them of being incompetent kidnappers. Must admire her sense of humor!

The following morning, the principal informs pupils that they would be required to perform community service followed by a community meal. Additionally, there will be a dedication of a memorial statue in the town plaza, and appropriate behavior is anticipated.

Wednesday is assigned to Uriah’s heap, an antique shop, as an employee. The principal also notifies her of her participation in a performance. She desires Wednesday to play her cello at the event and assist the adjacent school band.

Wednesday informs Xavier, while in town for their respective volunteer work, that she still believes Rowan is dead. Although he does not believe her, Xavier is eager to answer her questions concerning the image in the book. He informs her that the man seen in the photograph is Jericho Crackstone, the town’s founder.

In the meantime, the sheriff is convinced that Nevermore is connected to the latest attacks in the woods. However, the mayor disagrees with him and requests that he discover and care for the bear. He tells him that Nevermore is the largest source of revenue for the town, thus they cannot point fingers at them.

Wednesday requests that she and Enid trade volunteer positions so that she can gain entry to the Pilgrim world and learn more about Crackstone. The day does not go as planned; the three miscreants begin tormenting Eugene, but he is spared by Wednesday. In the antique store, Enid and her crush Ajax had a moderately terrifying event. This does not prevent Enid from shooting her shot and flirting with Ajax, who is completely ignorant.

Wednesday, after rescuing Eugene, asks him to be her lookout as she breaks into the old Crackstone meeting house. There, she sees a portrait of a girl that she recognizes from her prior vision. She also knows the book the girl in the portrait is carrying. The original book is not present at the meeting location.

Arlene, a teacher, interrupts Wednesday’s little eavesdropping rendezvous. Arlene assigns them to a new position, but Wednesday is determined to locate the actual meeting place.

She visits Tyler, where she also encounters Xavier, who is volunteering at the café. He advises her to avoid Tyler, but Wednesday reminds him that she is free to choose who she associates with. Wednesday asks Tyler whether he knows where the actual house is located. Tyler offers to take her and asks her to wait, but she declines. The house is situated in the midst of the forest, so she decides to bring Thing along.

At the house, she attempts to touch objects in an attempt to have a vision. Initially, it fails, but as she is about to depart, she has a vision. In the vision, she sees the girl, Goody, once more. She is being harassed by Crackstone’s party of pilgrims. He accuses her of being a witch and the mistress of Lucifer. He incites the mob to toss her and her society of misfits into a burning home. Goody’s mother begs her to flee and save herself so that she may revenge her family. She is able to escape from the house, but Crackstone pursues her.

Wednesday awakens from her vision and observes the close monster. She pursues the monster into the forest and realizes that it can morph into a person. As she analyses this new information, Xavier unexpectedly appears, and she tries to show him the monster’s footsteps, but the rain has washed them away. Wednesday is also concerned about Xavier’s coincidental presence at that moment. He informs her that he heard her talk with Tyler and has come to ensure her safety.

As they return to the city, he inquires about her visions and cautions her that they may not be genuine. His father is a prominent psychic and author of books on the subject, so Xavier believes he is an expert by association. He also informs Wednesday that he is starting to believe that something awful occurred to Rowan since he has been acting funny in his text conversations.

He also believes that her idea of Crackstone has no relevance to the future. Wednesday believes that everything is interconnected and that Rowan was correct about the impending disaster. She informs Xavier that she will not sit back and whitewash the history of the witches’ plight. She informs him that she will not give up searching for the monster.

Wednesday arrives in town just in time for the band performance, which kicks off the festivities for the presentation of the statue. She enlists Thing’s assistance to ignite the statue during the show. As everyone flees, she sits calmly amidst the tumult and plays her cello fiercely.

After the ceremony, the principal is enraged and suspects Wednesday is the perpetrator but has no proof. Wednesday affirms her innocence and questions the principal’s decision to conceal the facts. The principal informs her that she cannot risk Nevermore’s destruction on her watch. She desires to start over and make amends with the locals. Wednesday informs her it will never work because the majority of local residents still despise them.

Later that night, the monster assaults another individual, whose camera captures the attack.

Enid is delighted for her first date with Ajax, but he is unable to attend due to a mirror mishap. Enid believes that he stood her up and is thus upset and angry.

As the show concludes, we observe numerous characters concealing secrets and the sheriff developing the murder scene film.

It appears that certain Jericho residents in the vicinity of the school are acting suspiciously. We cannot help but assume that each of them is either the monster itself or a creature affiliated with it.

Xavier is currently more suspicious. How Ms. Thornhill figured out how to enter the secret Nightshade room is likewise unknown. Hopefully, we will receive some answers during the first season.

Wednesday – Season 1 Episode 4 "What a Night" Recap and Analysis

Sat Dec 3 , 2022
The fourth episode of Wednesday begins with her and Thing slipping into the county coroner’s office. She want to discover more about the monster’s victims and study the corpse of the most recent victim. Her investigation is interrupted by the coroner and the sheriff’s return. She overhears their chat while […] 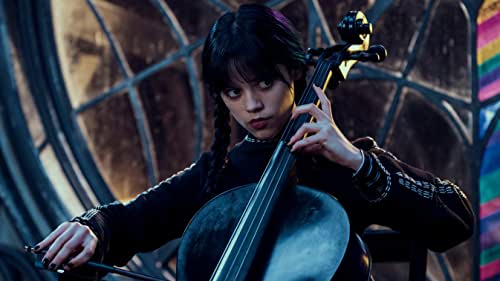