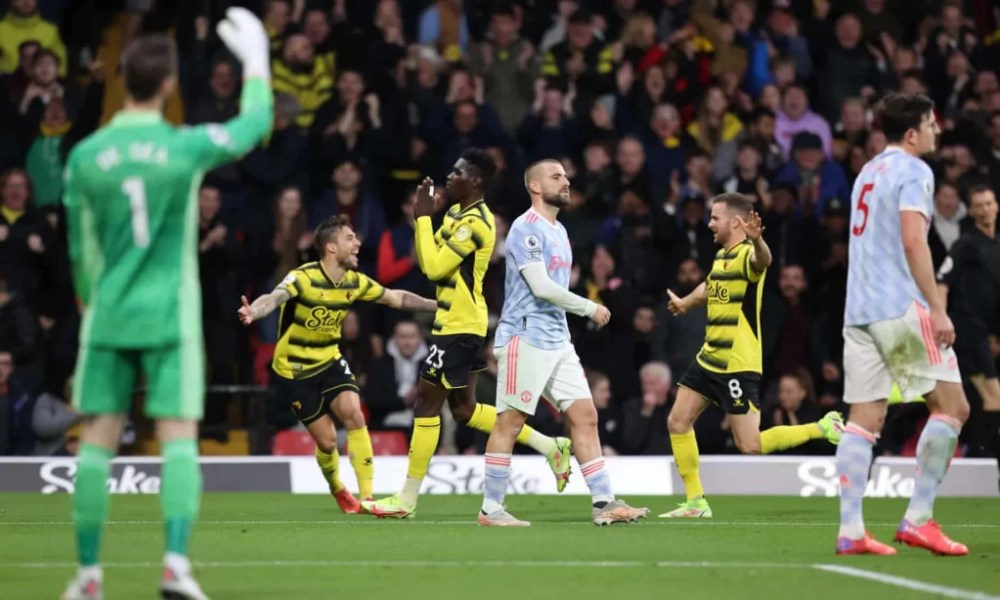 This time, there would be no rescue mission, and instead, the gruesomeness of modern-day Manchester United would be exposed once more. On another day, they could have pulled the wool over everyone’s eyes once more and overtaken Watford’s halftime lead, as Donny van de Beek scored soon after his introduction.

Instead, it was another humiliation: a shambolic, awful performance faced head-on by a barnstorming performance from Claudio Ranieri’s club. It was the type of performance that gets managers fired and then some, so no one should be surprised if Ole Gunnar Solskjr is next.

Joshua King and Ismaela Sarr, who had previously missed a twice-taken penalty, ensured they got their creamy desserts before substitutes Joo Pedro and Emmanuel Dennis added insult to injury in additional time. Harry Maguire’s 69th-minute expulsion fit in perfectly with the mess that preceded it.

The biggest surprise at halftime was that United was just two goals behind. They were depressed and lethargic when Aaron Wan-Bissaka, called on to deal with a straightforward Kiko Femina cross at the far post, hooked a bad header towards Dennis.

The Nigerian striker switched to his left foot and arrowed over a central that King, perfectly timing his intervention, swept first-time beneath David de Gea.

Watford had only scored once in their previous five games, but United couldn’t claim a lack of forewarning. They had no response to the hosts’ pace and energy in the first half-hour and may have been out of hope when King scored. It was equally worrying because they should have been deeper behind when Sarr raked a superb second. Instead, he had enough to do when Femina found him comprehensive on the right side of the box, even if his isolation said volumes about United’s defensive lapses. Still, he made light of the situation by blasting low into the one far-corner place De Gea couldn’t reach.

It was a very confident finale, especially in light of what had come before.

Sarr’s straight runup was doomed, and De Gea parried his initial attempt, low to the left, only for Femina to smash the rebound past him from an angle. However, Femina’s suspiciously rapid reaction dampened Watford’s joy, and VAR determined he was a yard inside the box when Sarr aimed.

Despite Maguire’s protests, the statutes dictated that Watford would be given a second chance, but Sarr appeared no more convincing the second time around. The keeper’s trailing left hand deflected his strike, which was stronger but closer to De Gea.

United may have felt they were safe, but Watford had only just begun. Even if their opponents were terrible, Ranieri’s team deserves credit for the manner they tore forward. Maguire had made two goal-saving challenges previous to King’s goal, the second following a blunder by Nemanja Matic; he would make another on King before Sarr’s shot. De Gea also had to stop a header from King, and United’s other forward contribution before the break was a half-volley from Marcus Rashford that Ben Foster saved excellently.