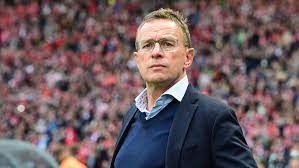 Ralf Rangnick has been named as Manchester United’s temporary manager till the conclusion of the season.The 63-year-old German, formerly the head of sports and development at Lokomotiv Moscow in Russia, replaces Ole Gunnar Solskjaer, who was fired earlier this month after a three-year reign as manager during which the club failed to win a trophy.

Rangnick will remain as a consultant for another two years after his six-month stint in command.”I am thrilled to be joining Manchester United and am committed to helping the club have a great season,” Rangnick stated on Monday.”The group is talented and well-balanced in terms of youth and experience. For the next six months, my sole focus will be on assisting these guys in realising their full potential, both individually and collectively.

“Beyond that, on a consulting basis, I look forward to help the club’s longer-term aims,” Rangnick continued.Rangnick has been recognised as an influence on Liverpool manager JurgenKlopp, Chelsea head coach Thomas Tuchel, and Bayern Munich manager Julian Nagelsmann, among others, as a pioneer of German football as an early proponent of the “gegenpress” tactical strategy.

United are presently in the eighth position in the Premier League, 12 points behind leaders Chelsea. On Sunday, United and Chelsea drew 1-1 at Stamford Bridge in the Premier League.Given the German’s tactical style, Rangnick’s presence has sparked a lot of conjecture regarding Cristiano Ronaldo’s place in the Manchester United club.United’s next Premier League match is against Arsenal on Thursday at Old Trafford.According to the Manchester club, Michael Carrick will continue in command of the first team until Rangnick’s work visa is completed.