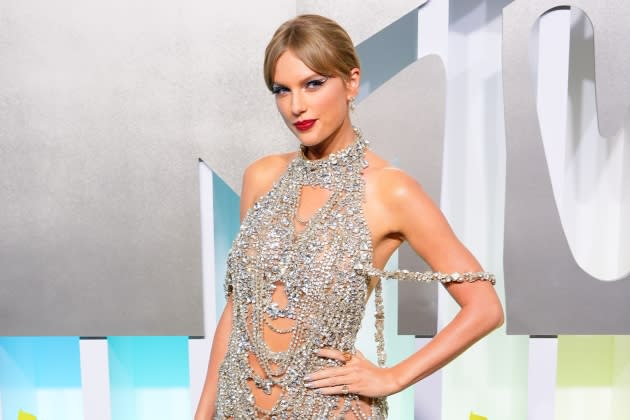 During “Thursday Night Football,” Taylor Swift gave fans a sneak peek at the music videos for her 10th album, “Midnights,” via a teaser trailer.

Swift remarked at the beginning of the teaser, “I just wanted to say thank you so much to Amazon for giving me the opportunity to show you guys a first look teaser trailer of the secret projects I’ve been working on for a very long time.” “These endeavors are the ‘Midnights’ music films, the music videos I’ve created for this album to visually explore its universe. And I adore telling stories, writing songs, creating videos, and directing them.

And this was a great opportunity to collaborate with the cinematographer Rina Yang, with whom I worked on the 10-minute short film ‘All Too Well’. This time around, we really wanted to stretch ourselves and try new things, and I’m extremely proud of what we’ve created and I hope you enjoy them. You’ll learn more about the incredible actors we worked with towards the end of the teaser trailer.”

Swift confirmed in a tweet that the first music video will be for “Anti-Hero” and will release on October 21 at 8 a.m. ET. Swift and Antonoff composed “Anti-Hero,” the third tune on the album.

Earlier on Thursday, at 9:13 a.m., a video was uploaded to Twitter. ET (coincidence? ), Swift announced, “Hey, it’s Taylor. If you watch the ‘Thursday Night Football’ game on Amazon Prime, you’ll get a first glimpse at the secret projects I’ve been working on for a very long time in preparation for the ‘Midnights’ album.

Swift has been teasing the song titles of “Midnights,” which she describes as “the story of 13 restless nights strewn throughout my life,” for the past month. On Thursday, investigative fans discovered that Swift had previewed a phrase from the album during a lecture she gave at NYU five months prior. Swift stated, “We will breathe in, breathe through, breathe deeply, and breathe out,” followed by the joke, “And I am a doctor now, so I understand how breathing works.”

Now, Spotify billboards promoting “Midnights” have appeared in locations such as Nashville, Tennessee, and So Paulo, Brazil, with the slogan “Breathe in, breathe through, breathe deep, and breathe out.”