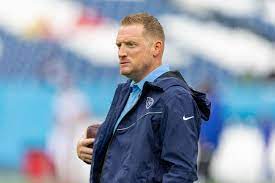 Later, Downing posted bond after being booked into the Williamson County (Tennessee) Jail.

At approximately 2:30 a.m. local time, according to the Tennessee Highway Patrol, Downing was noticed driving a car at a high rate of speed on Interstate 65. A THP trooper conducted a traffic check on Downing and noted indicators of intoxication and the odor of an alcoholic beverage emanating from his car. Downing was subsequently arrested.

The Titans stated in a statement, “We are aware of the reports about Todd Downing and are now obtaining additional information.”

Friday, Titans head coach Mike Vrabel informed reporters that he had spoken with Downing, owner Amy Adams Strunk, and general manager Jon Robinson, and that the team was taking the situation “extremely seriously.”

Vrabel stated, “We all have a big duty as members of this community, coaches and players of this organization, fathers, spouses, and teammates to make excellent decisions.”

The NFL stated that it had communicated with the Titans and would review the situation.

“All league and club personnel, including coaches, are potentially liable to discipline if a rule infraction is judged to have occurred,” the league stated in a statement.

Vrabel declined to comment on whether or not the team was contemplating self-discipline and stated that the club would cooperate with whatever the league decided to do.

The assistant coach was arrested hours after the Titans defeated the Packers 27-17 at Lambeau Field.

Since 2019, 42-year-old Downing has been with the organization. In 2021, he was elevated from tight ends coach to offensive coordinator.