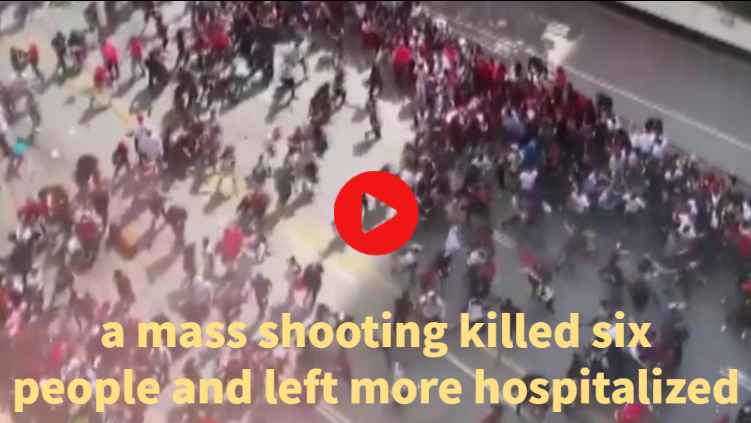 In Highland Park, a mass shooting killed six people and left more hospitalized; a suspect is being sought

A gunman opened fire on the Highland Park Fourth of July parade just 10 minutes after it began, killing six people and wounding at least two dozen others. The Highland Park police advised people to stay away from the area shortly after noon. Near the parade’s reviewing stand, a Chicago Sun-Times reporter saw three bodies covered with blankets and five other people wounded and bloodied.

A total of 26 people were taken to Highland Park Hospital and five to Evanston Hospital, with the “vast majority” being treated for gunshot wounds, but some were injured due to the chaos of the parade.

Highland Park resident Miles Zaremski told the Sun-Times: “I heard 20 to 25 shoots, which were fired rapidly.”. Handguns or shotguns were not the only weapons used.”

“Everyone disperses, please,” the police said. This is not a safe place to be.”

As panicked parade-goers sought cover on Central Street in downtown Highland Park, they left behind chairs, strollers, and blankets as they fled the parade route. Klezmer music continued to play despite the gunfire, apparently unaware that people were running.

The Illinois State Police, Highland Park police and other authorities were patrolling the area, some armed with rifles, looking for the shooter. According to a source, FBI agents were also at the scene.

During the parade, Adrienne Drell, a former Sun-Times reporter, observed members of Highland Park High School’s marching band run along Central Avenue as she sat on a curb.

In a shout directed at Sunset Foods, Drell heard the students shout.

“There’s panic in the whole town,” she said. “Everyone is just stunned beyond belief.”

As she and other spectators watched the parade, she ran across the street to a nearby parking lot.

“It was a quiet, peaceful, lovely morning, people were enjoying the parade,” Drell said. “Within seconds, to have that peacefulness suddenly ripped apart, it’s scary. You can’t go anywhere, you can’t find peace. I think we are falling apart.”