The fourth episode of Wednesday begins with her and Thing slipping into the county coroner’s office. She want to discover more about the monster’s victims and study the corpse of the most recent victim. Her investigation is interrupted by the coroner and the sheriff’s return.

She overhears their chat while hiding in a funeral cabinet. The murderer collects trophies from his victims. The coroner eagerly agrees to the sheriff’s request that this information remain confidential. He is more enthusiastic because this is his final case before retirement.

The following morning, Wednesday presents her discoveries with Edin, who passes out upon viewing the horrific crime scene photographs. Wednesday finds Xavier’s neck wounds somewhat strange in class, but he explains that he injured his neck while fencing. Wednesday does not believe him and conducts surveillance. She breaks into his secret painting room on the school grounds after discovering it. Once inside, she discovers sketches of the monster and steals one before leaving.

Xavier observes her before she leaves and inquires about her presence. He responds that it is his private art studio, but he declines to offer her a tour. She has no legitimate reason to be there, so she decides to invite him to the forthcoming Rave N dance. Xavier is pleased to be asked and believes she is interested in him.

Edin is also delighted that Wednesday has changed her mind and now desires to go dress shopping together. Wednesday, on the other hand, has different plans and does not consider dress buying to be their thing. She approaches the sheriff in town and attempts to convince him that they should walk together. Initially hesitant, the sheriff eventually agrees due to the Mayor’s repeated requests for an update and Wednesday’s lobbying. He requests that she bring him some proof so that they might possibly work together to zero down on a suspect.

Edin, left to her own devices, encounters Lucas Walker, the son of the mayor and one of the three miscreants. He asks Edin to accompany him to the school dance so he may make an ex-girlfriend envious. Edin feels this is a brilliant plan because she still believes Ajax ghosted her and wants to make him envious as well.

Wednesday encounters Tyler as she leaves the station, and he attempts to convince her to ask him to the dance. He does not approve of her decision to take Xavier. He believes he has a relationship with Wednesday, but she informs him that she is quite busy and that he is not a priority. Ouch!

Wednesday requests Eugene to store her criminal photos at the Beehouse later that day. Enid does not want the artwork displayed in their room. Eugene requests that she put in a good word for him with Enid. In addition, he assists Wednesday in locating the monster’s lair after noticing its depiction on her board. They decide to explore the lair, where they discover a broken claw, which Sarah collects as proof.

She returns to school and infiltrates Xavier’s secret art studio in order to steal his DNA. When Xavier discovers her, he is compelled to explain how he acquired the monster drawings and scratches on his neck. Additionally, he discovers that she actually asked him to the dance as a ruse when she infiltrated his workshop. Wednesday brings the claw and Xavier’s DNA sample to the sheriff and requests a DNA test.

Wednesday, whose partner in the dance has stopped talking to her, asks Eugene to accompany her to the monster’s lair in order to identify the creature. Tyler arrives on her doorstep dressed to the nines and eager to be her date, thwarting her plans for an exciting night of stakeout.

The thing did something dirty behind her back by sending Tyler a letter posing as Wednesday and inviting him to the dance; he also got her the dress that attracted her attention. Wednesday requests that Eugene abandon their plans for the following evening, but he disregards her advice and resolves to go alone.

At the dance, Xavier is displeased to see Tyler and Wednesday together, so he asks Bianca to use her siren abilities to help him get over Wednesday. Bianca is upset by this request and consequently leaves. Wednesday and Tyler enjoy a nice time together, and she discovers that Tyler formerly bullied Xavier, but this does not bother her. On the other side, Lucas begins to recognize that he shares many similarities with Enid. However, he is at the party to destroy it, and at the end he and his friends spray red paint on the students.

Enid is disheartened to learn that he merely used her, but the scenario affords her the chance to clarify the misunderstanding with Ajax. They make up and make out.

Wednesday gets a vision of Eugene being attacked by the monster while everyone else is fleeing from the paint spray. She goes to the woods in an attempt to save him, but she arrives too late. The creature is far gone by the time she reaches him, and he is barely alive.

It is somewhat disappointing to see Xavier and Tyler attempt to win Wednesday’s favor when she is more focused on locating the monster. She will not be able to comprehend or even reciprocate their emotions.

Wednesday Episode 5 Recap: It's Time to Dig Up the Past

Sat Dec 3 , 2022
After focusing for three entire episodes on Wednesday’s exploits at Nevermore Academy, Episode 5 brings the family back together. “You Reap What You Sow” gives us another taste of Luis Guzmán as Gomez, Catherine Zeta-Jones as Morticia, and Isaac Ordonez as Pugsley, and also allows Wednesday (Jenna Ortega) to face […] 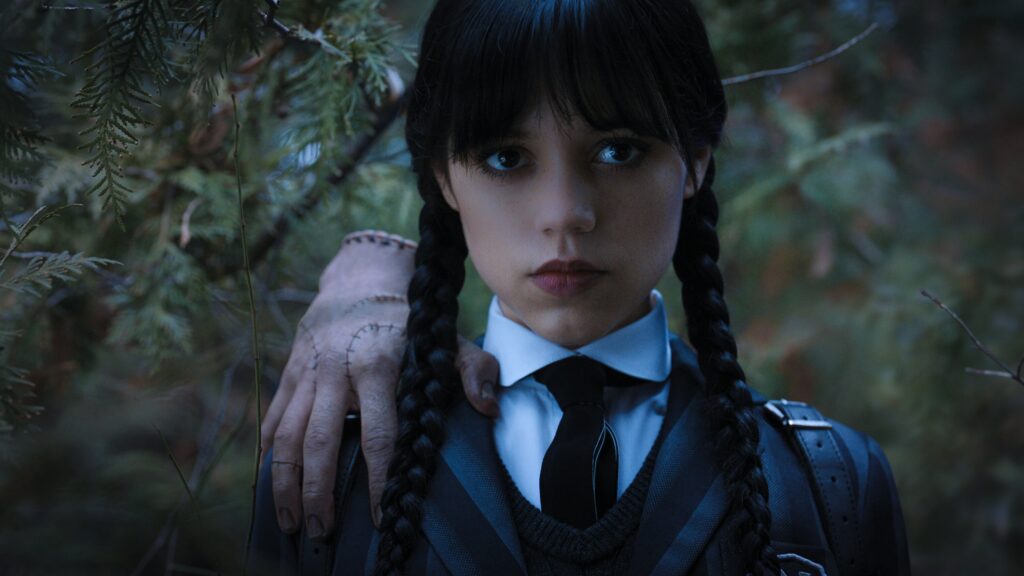